Self-assembling systems are a promising category of material that enable complex structures to form from smaller and simpler molecular building blocks without external impetus. In such systems, characteristics such as morphology and chemical properties are effectively “encoded” in the corresponding characteristics of the building block. This offers the possibility for the rational design of materials that are tailored to specific applications, ranging from drug delivery in healthcare to molecular electronics. However, the assembly process is often driven by a subtle balance of multiple intermolecular forces such as electrostatics, hydrogen bonding, and solvent interactions. Any control and rational design is thus predicated on a thorough understanding of these driving interactions.

A new study published in the journal Nanoscale from the Life Sciences group in the ILL, in collaboration with the European Synchrotron Radiation Facility (ESRF) and the Institut de Biologie Structurale (IBS), reports on a novel system of self-assembling nanotubes composed of the small DNA minor groove binding molecule (designated DB921). This molecule, which was tailor-made to bind to the minor groove of DNA, was originally investigated in the context of research into a wide range of potential cancer chemotherapeutic agents. However, quite serendipitously, it was discovered that the ligand self-assembles in the presence of alkali halide salts. A highly complementary approach was subsequently employed to study the assembly mechanism, combining small-angle neutron scattering (instrument D11 at ILL), small-angle X-ray scattering (BM29 and ID02 beamlines at ESRF), high-angle fibre diffraction, and direct imaging by cryo-EM (IBS).

This multi-technique approach was crucial in terms of associating structural information on the nanotube itself with time-resolved studies of its assembly; it revealed a hierarchical assembly mechanism that is primarily driven by electrostatic interactions whereby halide anions from the salt electrostatically bind the cationic DB921 molecules together. Secondary effects such as solvent interactions and aromatic π- π stacking serve to solidify the final morphology. This understanding has facilitated control over the self-assembly, as demonstrated in this study, whereby the assembly time could be modulated across nearly an order of magnitude by simply varying the concentration of salt.

Furthermore, the nanotube’s highly monodisperse cross section was also found to be determined by DB921’s interaction with the surrounding salt, in addition to the molecule’s natural curvature. Consequently, different nanotube diameters can be explored by modulating the nature of the halide from chloride to bromide. These promising results highlight DB921 as an interesting candidate material for potential applications such as drug delivery, and future work will focus on achieving additional degrees of control over the assembly process. 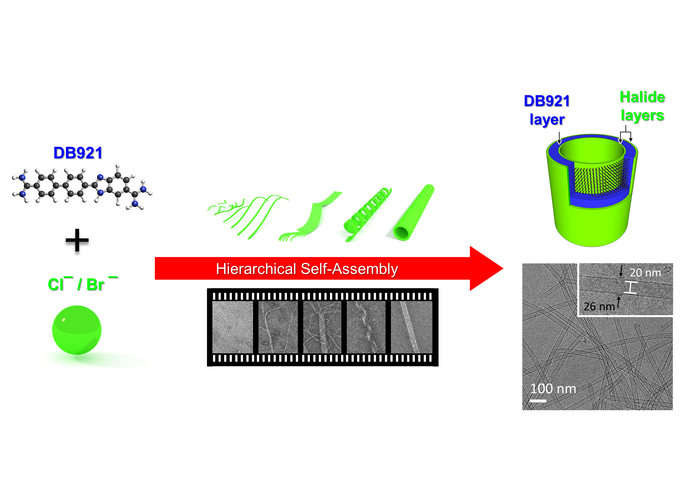