Galectins attach to other proteins via the carbohydrates on their surfaces (sugar-binding proteins). As such they impact on a range of processes in the cell associated with a number of diseases, including heart disease and breast cancer – the most common cancer in women worldwide, with 1.7 million new cases diagnosed in 2012 alone.

Understanding how galectins bind to and distinguish between different sugars can help guide the design of new molecules that act as inhibitors – blocking this process, and therefore limiting the development of certain diseases. However, researchers are only beginning to get the full picture of the binding patterns involved and the exact details of the interactions between different sugars and the protein have not been well defined. Detailed knowledge of the hydrogen bond networks in the protein-sugar complexes is key to providing a better foundation in the efforts to design new effective galectin inhibitors.

In a collaborative effort, experts in neutron and X-ray crystallography from across Europe and the US came together to determine the hydrogen bonding networks in detail for the C-terminal carbohydrate recognition domain of galectin-3 (galectin-3C). Scientists from Institut Laue-Langevin (ILL, France), Lund University (Sweden), Oak Ridge National Laboratory (USA) and Heinz Maier-Leibnitz Zentrum (Germany) all worked together on the project. 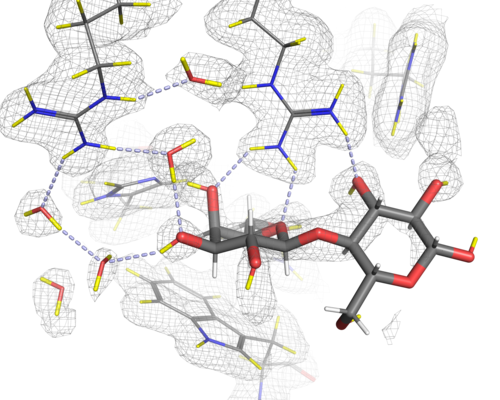 Hydrogen bonds to lactose in the C-terminal carbohydrate recognition domain of galectin-3 as determined with neutron crystallography.
The bonds are represented here by light-blue dotted lines.

The resulting paper, published in Journal of Medicinal Chemistry, demonstrates that by using neutron crystallography the positions of the hydrogen atoms and the hydrogen bonding networks can be revealed, providing a better understanding of the binding interactions involved, even at modest resolutions. In addition, by determining the neutron structure of the sugar-free form of galectin-3C (apo galectin-3C) the positions and orientations of water molecules in the binding site before binding have been revealed. Hence comparison of the apo- and sugar-bound structures allowed us to observe how the interactions change upon binding and has helped improve our understanding of the role water plays in the binding process.

Matthew Blakeley, LADI-III beamline scientist at the ILL and co-author of the study, said: “Neutron crystallography is a powerful complementary technique to X-ray crystallography since it provides details relating to hydrogen atom positions which are generally not revealed using X-rays alone. Combining the information from both techniques therefore gives us the most detailed picture possible.”

Derek Logan, associate professor in structural biology at Lund University and main author of the study, said: “This experiment has helped to confirm that drug design against galectins to date has been wise to focus on molecules derived from sugars, as the interactions we see would be difficult to mimic with other molecular shapes. With this confirmation we are now in a much better position to accurately predict the key binding interactions and to help our colleagues in the pharmaceutical industry develop new drugs for use.”