Closing the last gap for the Periodic Table’s 150th birthday

Timely for the “International Year of the Periodic Table of Chemical Elements” which celebrates the 150th anniversary of Mendeleev's discovery of the periodic table, a European collaboration of chemists and physicists has published the first experimental determination of the ionization potential of the lanthanide element promethium, thus closing the last remaining gap for this fundamental atomic property in the Periodic Table.

In 1869 the Russian chemist Dmitri Mendeleev proposed a tentative “system of elements” ordering the then known chemical elements according to their atomic weights and chemical properties. Mendeleev attributed some evident gaps in his systematics to missing elements that were still to be discovered. In 1913 the British physicist Henry Moseley determined by X-ray spectroscopy the number of protons (Z) of each element. Today the Periodic Table of the elements is ordered according to the proton number which, rather than the atomic masses, determine the chemical properties. Moseley identified missing elements by proton number, amongst them the element with proton number Z=61. The missing elements were meanwhile found and named and the Periodic Table has been extended up to Z=118 (oganesson) by artificially synthesized elements.

The ionization potential is a fundamental atomic property, characteristic for every chemical element. It represents the energy required to remove one electron from a neutral atom so that it becomes a charged ion and thus governs its chemical properties. The ionization potentials of all chemical elements from Z=1 (hydrogen) to Z=103 (lawrencium) had been experimentally determined previously, with one exception: Z=61, the element promethium.

“For various reasons this task was particularly difficult. Firstly promethium has no stable isotopes, only radioactive ones that have to be produced artificially, which means that we have to manage with extremely small samples. Secondly, close to the ionization potential the atomic spectrum of promethium resembles a dense forest of lines which makes it difficult to see the wood for the trees. ” says main author Dominik Studer (Mainz University).

Eventually a collaboration of scientists from different European labs tackled this challenge. Pm-147, a long-lived isotope of the element promethium, was artificially produced by irradiating enriched Nd-146, an isotope of the neighbouring element neodymium, in the European high-flux reactor of the Institut Laue-Langevin (ILL) in Grenoble. The radioactive isotope Nd-147 produced by neutron capture decayed then to Pm-147. The isotope of interest was then radiochemically separated from the target material and other coproduced lanthanides at Paul Scherrer Institute in Switzerland. After shipping to Mainz University it served for detailed atomic spectroscopy at the RISIKO off-line radioactive ion beam facility. Thus, the most comprehensive atomic spectroscopy so far was performed for the element promethium, tripling the knowledge of atomic levels.

Promethium belongs to the lanthanide series of chemical elements which exhibit most complex atomic spectra. To correctly determine the ionization potential a combined technique was employed where absorption of laser light brought one electron of the atom into a highly excited atomic level and an electric field is then used to give it the last kick to leave the atom. Scanning the electric field for different laser wavelengths, which are precisely tuned to atomic resonances, provides an unambiguous and accurate measurement of the ionization potential, giving a value of 5.58188(4) eV. Here eV stands for electronvolt, representing the unit of energy change when an electron traverses a potential of 1 Volt.

“The very high neutron flux of ILL’s research reactor enables the efficient transmutation of stable isotopes into radioactive isotopes that are in turn essential for many applications ranging from cancer treatment and nuclear astrophysics experiments to the present example in atomic physics.” says co-author Ulli Köster (ILL). 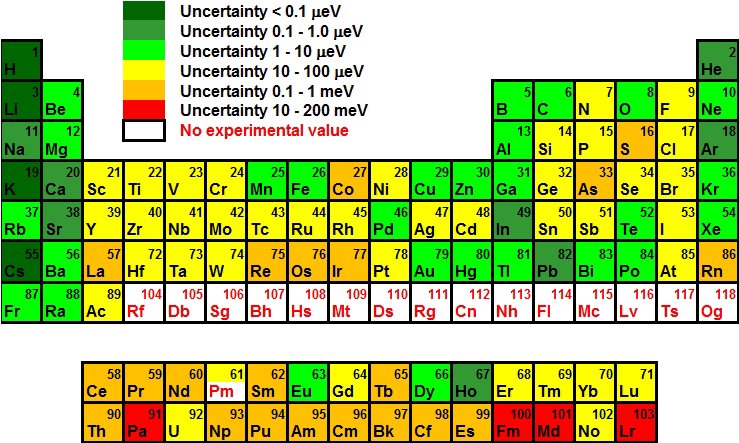 The colour coded Periodic Table shows the uncertainty with which ionization potentials of the chemical elements are known today. Prior to the present work no experimental value existed for element 61, promethium, now it has been determined with an uncertainty of 40 μeV (40 micro electron Volt), i.e. with better precision compared to its neighbouring stable elements.