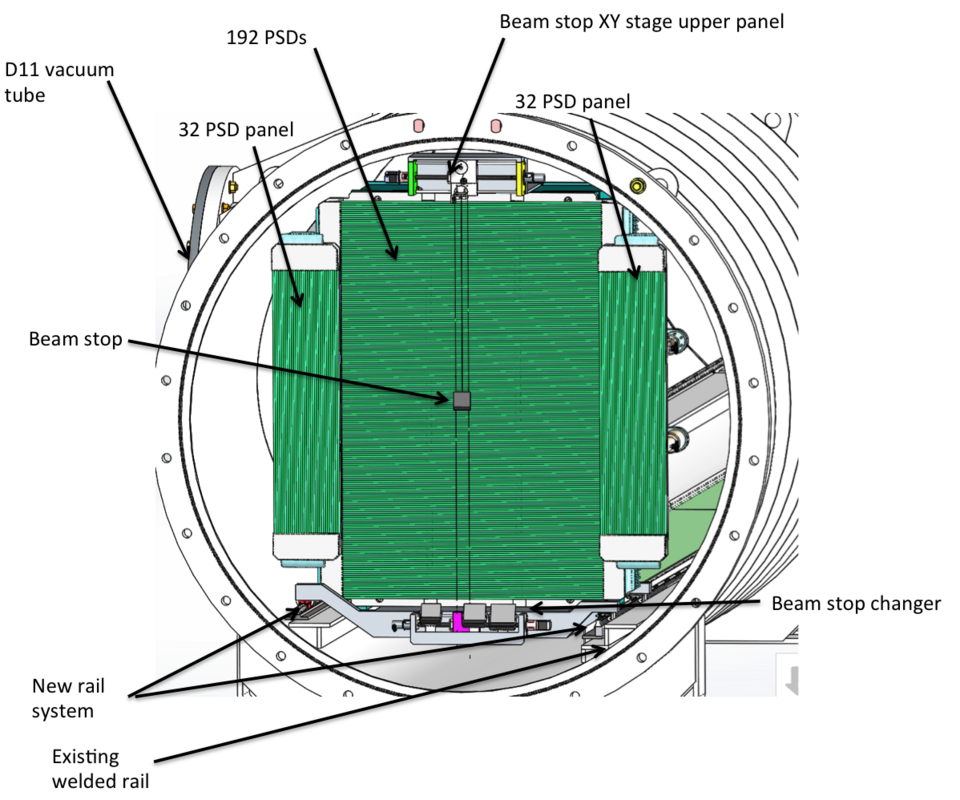 D11 - a "microscope" for exploring the nanoworld

D11 is the archetype of a long, pinhole geometry instrument for small angle neutron scattering (SANS), designed for the study of large scale structures in soft matter systems, chemistry, biology, solid state physics and materials science. About 60% of all experiments are  performed in the field of soft condensed matter.

The instrument receives neutrons from the vertical cold source of the ILL high flux reactor, which is situated about 100 m from the first part of the instrument (the selector) and about 140 m from the sample position. The detector is hence in a very low background environment.

The polychromatic beam from the cold source is monochromated by a helical slot (ASTRIUM) velocity selector which selects neutrons of ±9 % about a mean wavelength determined by the rotation speed of the drum. The neutrons are then collimated by a series of moveable glass guides. Guide sections are inserted into or removed from the beam depending on the incident beam divergence required.

Neutrons scattered from the sample are detected on a 96 x 96 cm2 CERCA 3He multi-detector mounted on a moveable trolley within the evacuated detector tube. The detector may be placed at any distance between 1.2 and 39 metres from the sample position, giving a total accessible momentum transfer range of 3 10-4 to 1 Å-1.

The D11 collimation system has been completely renovated between 2002 and 2004 (collimation renewal project).

In the context of the ongoing Millennnium Project “D11 Revised” (2005 – 2008) the instrument had been shut down during the year 2008: the project consists in (i) replacing the present detector, its trolley and the detector tank by a larger and faster detector in a new, wider tank (new detector and tank), including an extension to ultra low Q measurements (USANS option) and (ii) installing new collimating glass guides based on an innovative design change (guide replacement).

With 3 new collimation distances (1.5m, 28m and 34m), 6 new diaphragm changers, new mechanics including a complete re-alignment and the modifications at the selector area, the instrument has considerably gained in:

For instance, a flux gain of ≈ 10 is obtained for certain experimental conditions.

The future scientific requirements are calling for an innovative evolution of the instrument with a “best possible” specification, in order to strengthen ILL’s leading position in small angle scattering and maintain D11 as one of the world-wide most powerful and versatile SANS instruments. Consequently, the project of developing a faster and larger SANS detector has started in 2005, in the framework of the ILL’s Millennium Programme.

The present 3He detector will be replaced by the 3He - MWPC 128x128-7.5 (the former CERCA 3He detector of D22). This detector has a considerably larger counting area thus a much better dynamic range, a better efficiency and a better spatial resolution. After some modifications of the detector electronics, the maximum possible countrate can be increased to about 300 kHz, i.e. a factor of 6 higher than the present D11 detector. The detector shall be installed in a new tank with an extended length and larger diameter. In conjunction with the enhanced counting area, the tank elongation will considerably increase the totally available Q-range of the instrument and allow for measurements at significantly lower Q-values than possible at present. Furthermore, it is planned to implement in the future a multi-hole imaging USANS option, thus challenging new frontiers in space and time resolution.

Following the review and analysis of the D11 guide system by McStas simulations in late 2005/ early 2006, an innovative guide design change had been decided in spring 2006. Significant flux gains can be predicted for a large range of collimation distances with a new widened glass guide with an opening 6.5m trumpet (30mm->45mm width) at the collimation entrance and a focusing trumpet at the collimation exit, near to the sample position
(see Lieutenant K., Lindner P., Gähler R. (2007) J. Appl. Cryst. 40, 1056 - 1063).
In June 2006 the guide replacement project has been approved and coupled with the "new detector & tank" projcet to result in the extended Millennium project “D11 Revised”.