Rare coupling of electronic and lattice degrees of freedom observed 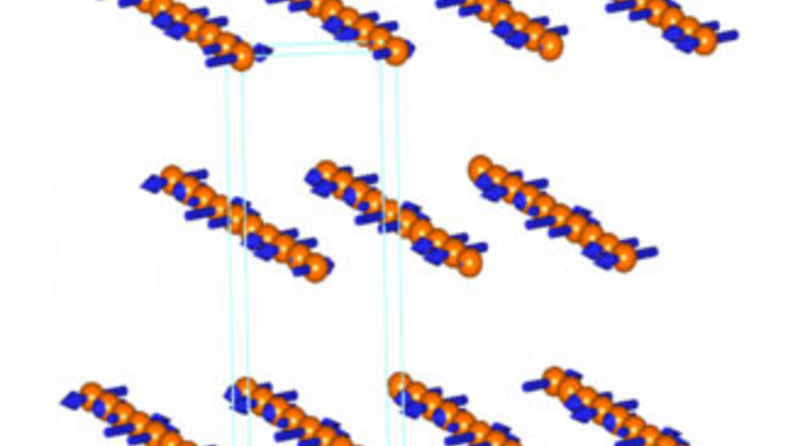 Using multiple techniques, an international research collaboration has found evidence of coupling between electronic and lattice degrees of freedom: a very rare phenomenon

It is an open debate why the more exotic coupling between electronic and lattice degrees of freedom, known as magneto-elastic coupling, is so rare.

The physics of strongly correlated electron systems is dominated by spin, charge, orbital and lattice degrees of freedom. The elementary excitations observed in these systems arise from localised, single-ion crystal electric fields (CEFs) as well as dispersive lattice vibrational modes (phonons), in addition to spin-wave modes below the magnetic ordering.

Although the energy scale of CEFs and vibrational modes is very similar, they are generally considered to be decoupled from each other. On the other hand, electron-phonon coupling gives rise to BCS-type superconductivity, which is a commonly observed phenomenon in many materials. It is therefore still an open question what happens to magnetic excitations when CEF-phonon coupling does take place.

Motivated by the striking manifestation of CEF-phonon coupling in tetragonal Ce-compounds, a group of scientists, led by ISIS scientist Dr Devashibhai Adroja, including researchers from ISIS, Institut Laue-Langevin, France, University of Johannesburg, South Africa and University of Zaragoza, Spain, performed a detailed examination of CEF excitations in the non-centrosymmetric tetragonal CeCuGa3 using neutron scattering on the MARI spectrometer at ISIS.

They discovered a clear signature of CEF-phonon coupling in CeCuGa3 which is characterized as a Kondo lattice heavy fermion system. The observed two low energy inelastic excitations and heat capacity behavior that cannot be explained using the standard models of CEF theory. Using a generalised vibron model with tetragonal point symmetry, they were able to explain the full set of inelastic scattering data with three CEF excitations. The intensity and temperature dependence of these excitations, as well as the temperature dependence of the heat capacity, were also correctly fitted using this model, giving a unified picture of CEF-phonon coupling in CeCuGa3.

Expanding the study to μSR spectroscopy on MuSR, neutron powder diffraction at the ILL and inelastic neutron scattering measurements on MARI and OSIRIS enabled the team to carry out a systematic investigation of magnetism and crystal field effects in CeCuGa3. These experiments, combined with magnetic susceptibility and heat capacity measurements, enabled them to infer the presence of antiferromagnetic ordering.

The neutron diffraction study on D20 at ILL further confirmed the long-range spin density wave antiferromagnetic ordering at low temperature with an incommensurate magnetic propagation vector, with the ordered moments pointing along the (1 1 0) direction. 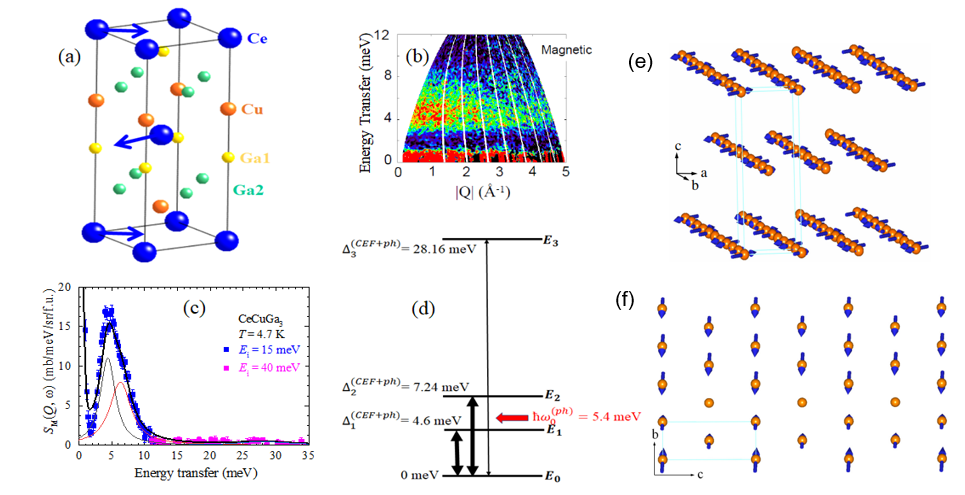 Caption: (a) Tetragonal unit cell for CeCuGa3. The arrows represent the active longitudinal optic phonon modes. (b) Magnetic inelastic neutron scattering response at 4.7 K. (c) Magnetic scattering SM(Q, ω) vs energy transfer E for Ei = 15 meV and 40 meV at 4.7 K. The thick solid black lines represent the fit based on CEF-phonon model. (d) The schematic energy levels of CEF-phonon coupled model along with the position of the phonon energy (red arrow) obtained from the fitting of INS data. (e) Incommensurate magnetic structure at 1.7 K investigated on D20 at ILL and (f) A projection of magnetic structure onto the bc-plane showing ferromagnetic arrangement of moments along the c-direction.

This article was originally written for / hosted on the ISIS website.